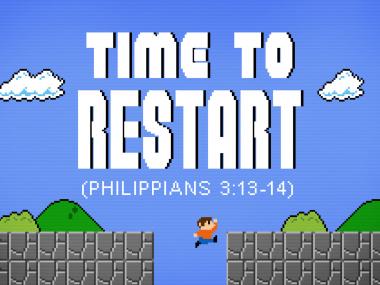 I started with word games, 4 different ones, so when one showed the commercial in the free version, I could go to the next one.  Evy got me into picture finds and I’ve become obsessed with them.  Every time the clock winds down, it turns red and flashing at the 30 second mark, and I have 3 or more left, I get frantic trying to find the silly little pictures.  It’s amazing how frustrated I get.  I don’t want to restart.  They give me that option every time or I could get 45 seconds, if I pay for it, and I don’t want to pay.  I inevitably have to restart.  I don’t want to.  But I have to.  I know the game gets easier, if I restart, because I’ve done it before, but something in me – does not want to.  Or how many of you have mashed the power button on a computer or copier when nothing else works?

Sometimes we HAVE to do a hard restart.  We don’t want to, we sure don’t want to, but sometimes we have to.  Sometimes our lives need a reset because we’ve worn a path pacing back and forth trying to decide whether to make a change or not.  We sometimes don’t want to move on.  We sometimes want to cling to the past like old comfy pajamas.  You know those that have small holes in them and you can’t bear to throw them out.  We dread the changes that we would have to make in our lives, all the work it’s gonna be to let go of the past.  We’re afraid to face the new realities, the new normal.  Paul knew that without God in the mix, we could never make real change on our own.  Paul knew this secret and he’s trying to teach us as well.

Beloved, I do not consider that I have made it my own; but this one thing I do: forgetting what lies behind and straining forward to what lies ahead, I press on toward the goal for the prize of the heavenly call of God in Christ Jesus.

For us to follow Paul’s example, we have to make peace with those around us, with ourselves, and with God.

Paul had a lot of stuff in his past.  Remember who he was.  Before he became Paul.  He was Saul.  Saul persecuted early Christians.  He tortured and stoned them.  He was on the way to do more destruction of followers of the Way, until he has an encounter with Jesus and is blinded for three days. He is saved by Ananias; he is transformed into Paul boldly preaching about Jesus Christ of Nazareth, the Jewish Messiah and Son of God.  Jew and Gentile alike were puzzled and perplexed by this.  On one hand you had Saul that ultimate enemy and bad guy and then you have Paul – the greatest apostle ever….

When he says, “forgetting what lies behind and straining forward to what lies ahead.”  He means it.

Paul definitely has baggage.  Most of us don’t have the label of murderer.  Do you think the new Christians were scared of Saul, I mean Paul.  I would not blame some of them for being apprehensive, giving him the side eye, or being wary.  Paul had to have known it.  Had to have known how people would see him.  Annanias is hesitant as he says, “Lord, I have heard from many about this man, how much evil he has done to your saints in Jerusalem; and here he has authority from the chief priests to bind all who invoke your name.”  The Jews had commissioned Paul to be the angel of death, but the Lord was teaching Paul about mercy and grace.  The Lord talked to Ananias and Ananias went to heal Paul.  Afterwards, the scripture says Paul hung out with the disciples for a few days in Damascus.  Hung out?  Hung out?  He was sent there to kill them!  God makes a way for us to have peace with others.  God makes a way for us to have lives so transformed that it is obvious for all to see.  It must be God.  God was with Paul.  God was with Ananias.  God was with the disciples.  The Holy Spirit was working all around them in that situation and throughout Paul’s life.  God doesn’t leave us as God finds us.

God worked through Paul and God can work through you and me.

We have to believe we are worthy of leaving the past behind.  We have to throw out those comfy, holey pajamas.  We have to stop looking at our lives through the rearview mirror and look at the big, wide open windshield in front of us.  If we constantly are looking back then we can’t move forward.  Paul, I’m sure had some guilt, but he knew what he had to do.  Keep focused on the present goal.  “I press on toward the goal for the prize of the heavenly call of God in Christ Jesus.”  Do you hear that?  It’s a call of God in Christ Jesus.  God still calls us even with the baggage, even with our pasts, even through our tears and shame.  We make peace with ourselves by acknowledging our past.  We make peace with ourselves when we say it out loud.  We make peace with ourselves by letting Jesus into our hearts and letting him heal us.

One of the most powerful and visual images that I have participated in was a time at Camp Pee Dee.  There was a canoe lake and a fishing lake at Camp Pee Dee and we walked this big, giant, life-size cross to the fishing lake.  It took a lot of us kids to carry the huge thing to the lake.  As we took turns, I don’t remember if they told us to be somber or solemn or we were being rowdy camp kids, but I remember thinking about carrying this alone and no wonder Jesus fell a few times.  When we got to the lake, again I don’t remember what was said or who the minister for the week was, but they had little pieces of paper and nails and we were to nail our sins to the cross.  Just that image brings up so many emotions, we were all crying in the pool house after using a hammer to nail our sins into the cross.  That image has stuck with me.  The Triune God knows all about us, knit us together in our mothers wombs, knows when we sit and we rise, knows every thought in our heads and every action that we’ve done – and loves us anyway.  Pursues us anyway.  Died for our sins.

No matter the bruises

No matter the scars

Still the truth is

The cross has made

The cross has made you flawless

No matter the hurt

Or how deep the wound is

No matter the pain

Still the truth is

The cross has made

The cross has made you flawless

When we make our peace with God, God is able to use us.  What Jesus says to Ananius to get him to go to Paul in Acts 9:15-16,“But the Lord said to him, “Go, for he is an instrument whom I have chosen to bring my name before Gentiles and kings and before the people of Israel; I myself will show him how much he must suffer for the sake of my name.”  We may not have the proclamation power of Paul and we certainly don’t want to suffer like Paul, but Jesus uses us as his instruments, to be his show and tell in the world.

There’s a hymn written by Carolyn Winfrey Gillette called “Christ You Offer Us Your Welcome.”

You have given us a mission — to invite our neighbors in —

and your call to love and listen is a place we can begin.

We need more than open houses; we need, first, to give our hearts.

By your Spirit, make us servants; that’s the way your welcome starts.

May we set a welcome table, may we find a common ground

where no one will feel they’re labeled, where acceptance can be found.

We don’t need to entertain there, or to do things that impress —

just to hear folks’ joy and pain there, and to love so all are blest.

In much the same way, Rachel Held Evans writes, “I had questions about science and faith, biblical interpretation and theology. I felt lonely in my doubts. And, contrary to popular belief, the fog machines and light shows at those slick evangelical conferences didn’t make things better for me. They made the whole endeavor feel shallow, forced and fake.

“What finally brought me back, after years of running away, wasn’t lattes or pastors wearing skinny jeans; it was the sacraments. Baptism, confession, communion, preaching the Word, anointing the sick — you know, those strange rituals and traditions Christians have been practicing for the past 2,000 years. The sacraments are what make the church relevant, no matter the culture or era. They don’t need to be repackaged or rebranded; they just need to be practiced, offered and explained in the context of a loving, authentic and inclusive community.”

When we take this meal, we’re following Paul’s example, making peace with those around us, ourselves and God.  But we’re also following Paul’s example because when we take this meal, it’s like a restart.  Forgetting our sins that lie behind us and pressing on toward the goal for the prize of the heavenly call of God in Christ Jesus. In this meal, we take part in this holy mystery that should forever change us if we let it.  And that’s what Jesus wants – that’s what Paul did; he was forever changed from Saul into Paul.  He proclaimed the Word made flesh and dwelt among us!  He had proclaimed hate and was a destroyer AND then HE was the biggest big mouth and planted churches and wrote several parts of the Bible.  If Jesus can transform him, what are we waiting for? 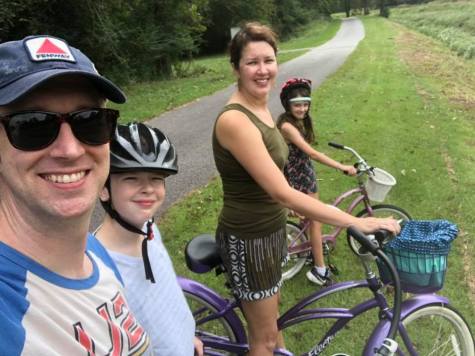